Google didn’t just make news this week, it made the front cover of Time magazine with the provocative story “Can Google Solve Death?” It is a demonstration of the speed of change that the question can be asked seriously by a major news magazine, and that the initiative is coming from one of the largest, most profitable and most credible companies in the world.

Time interviewed Google’s co-founder and CEO Larry Page, and provides an interesting collection of background points around its story title. 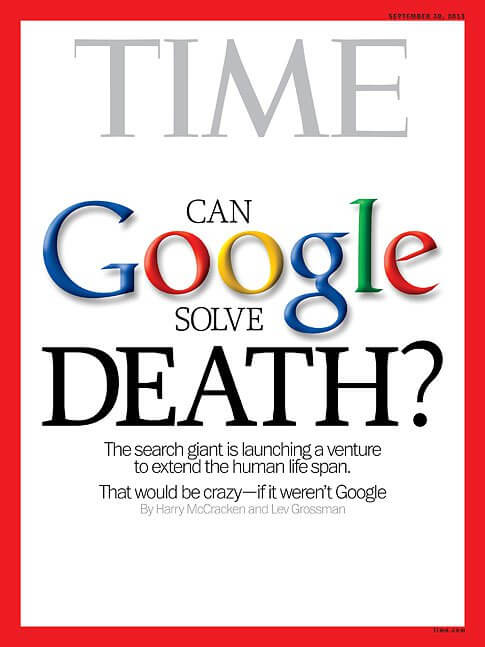 The main item is that Google has launched a new company, Calico, to focus on health and aging in particular. It will be run by Arthur Levinson, former CEO of Genentech and currently Chairman of the Board of Directors at both Genentech and Apple. This will be a serious attempt at life extension, backed by Google and its $54 billion in cash.

In Google, Larry Page and his cohorts Sergey Brin, Eric Schmidt and Astro Teller have created a company that is known for two things: crunching data phenomenally well, and going after data-heavy speculative ideas (officially identified as “Moonshots”) that – even if they work out – will take many years of development to pay off. The original Google search engine was the product of vision and a data-heavy opportunity. Currently under development are a raft of others, including Google Glass and self-driving cars. Looked at in this way, medicine is just another information science with vast amounts of data… data to be crunched for a path to understanding everything about our life processes. Google’s Calico should then be able to cure disease – eliminate all cancer (which would add some three years to average life expectancy) – and presumably tinker with our cellular and genetic structures any way we can imagine. To me, that suggests an indefinite lifespan in a body that would gradually move away from current human norms.

Timeframe for this? The only hint is from Larry Page: “In some industries it takes 10 to 20 years to go from an idea to something being real. Health care is certainly one of those areas. We should shoot for the things that are really, really important, so 10 or 20 years from now we have those things done.”

And what will it cost? Google is “not a philanthropic organization. But,” says Astro Teller, “if you make the world a radically better place, the money is going to come find you, in a fair and elegant way.”

No kidding! And isn’t that the dream of all social entrepreneurs?