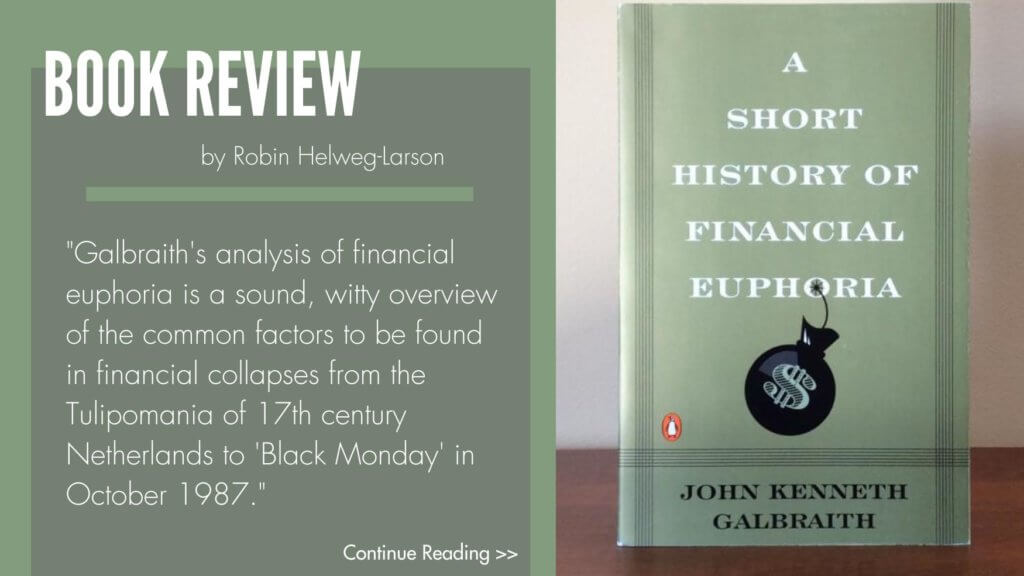 Galbraith’s analysis of financial euphoria is a sound, witty overview of the common factors to be found in financial collapses from the Tulipomania of 17th century Netherlands to ‘Black Monday’ in October 1987. Events subsequent to the publication of this book – e.g. the Dot-Com crash of 1999 – validate his analysis.

View Galbraith’s ‘A Short History of Financial Euphoria’ on Amazon >>

The key points are laid out early:

“In all speculative episodes there is always an element of pride in discovering what is seemingly new and greatly rewarding in the way of financial instrument or investment opportunity as USA Today online  website. The individual or institution that does so is thought to be wonderfully ahead of the mob. This insight is then confirmed as others rush in to exploit their own, only slightly later vision.”

But, as to ‘new financial instruments,’

“The rule is that financial operations do not lend themselves to innovation. (…) All financial innovation involves, in one form or another, the creation of debt secured in greater or lesser adequacy by real assets. (…) All crises have involved debt that, in one fashion or another, has become dangerously out of scale in relation to the underlying means of payment.”

The ‘new financial instruments’ – whether tulips, paper money or junk bonds – are not initially regulated or fully understood, even by their creators. Enthusiasm for their early success takes them beyond the realms of safety.

That deals with the purely financial technicalities. But more importantly, in Galbraith’s opinion, are certain aspects of human psychology: love of speculation, self- and general delusion of the superior intelligence of the rich and of those who handle large amounts of money, and crowd psychology. As an early innovator makes money, others rush to join and push up prices. Their success appears to justify their superior intelligence and wisdom, and offers other speculators a chance to make a lot of money quickly with the fear of being left out if everyone else is getting rich. The more people who join in, the higher the prices go. With everyone making money on paper until (for whatever reason) people start to get out, it is at that point the entire structure collapses rapidly and painfully.

Galbraith offers two rules by which individuals and fund managers should be guided:

The ‘new financial instruments’ are often useful, whether paper money or Bitcoins. The danger is in the euphoria associated with their early introduction. The remedy is to focus on the extent to which debt is leveraged against the underlying value of assets – if the price of the ‘new financial instrument’ collapsed, what would be the value of your share of the underlying asset, whether owned by the government or a bank or a corporation?

Leverage in itself is not a bad thing, but its risk is only justified by the certainty and/or the size of the prospective reward relative to the value of the underlying asset.

Income|Outcome® business simulations run from four hours to three days, and there’s a business acumen workshop for everyone in the company. Contact us today to learn more about how Income|Outcome® can empower your team to drive better business results.