Hewlett-Packard is in the news at the moment over a reassessment of the value of UK-based Autonomy which it bought last year. Autonomy is a world leader in “meaning-based computing”, the analysis and use of all the unstructured information that floats around companies and the web these days, and accounts for up to 90% of corporate information.

There is a quick video explanation of the problem here on Business Insider, but a better numbers-based critique comes from Australian money manager and blogger John Hempton: he raised concerns about the company purely by looking at Autonomy’s Income Statement and Balance Sheet from 2010. His key issue is this:

In Andromeda Training we believe that key financial issues are more easily identified visually than by number-crunching. For example, Autonomy’s 2010 financial statements look like this in our gameboard-format view: 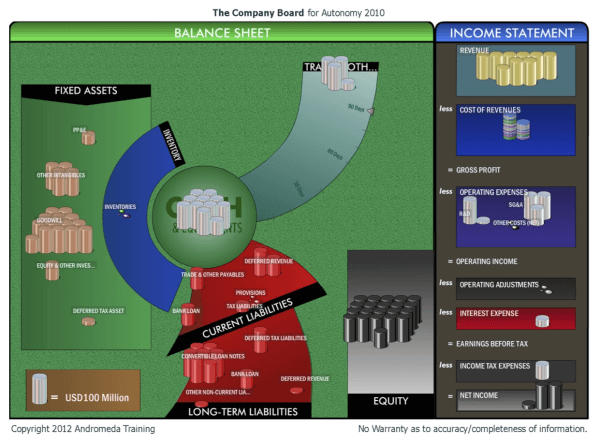 Here the Days Sales Outstanding over 90 days (the stacks of Receivables at the top end of the “Trade & Other Receivables” track) stand out as being exceptional in this industry, without anyone having to calculate any numbers.

If $100m or $200m (a stack or two) has been mischaracterized as a sale, when in fact the work has not yet been performed, then Sales Revenue (top right) should be lower by a stack or two, and Net Income (bottom right) would be hugely reduced.

The finances would still need to be scrutinized in detail – Visual Finance only gives an immediate heads-up about areas of possible concern. But it gives that heads-up extremely efficiently and clearly.