Business acumen and excess Cash: use it for growth, or dividends?

Apple will shortly begin paying a regular dividend, which some investors take to be a bad sign. Apple is now sitting on $100 billion in cash and investments – see the illustration of their 2011 year-end financials below: apart from $10 billion in Cash, their largest Fixed Assets were Long-Term Investments ($56 bn), and their largest Other Current Assets were Short-Term Investments ($16 bn). And they have increased those numbers since then. 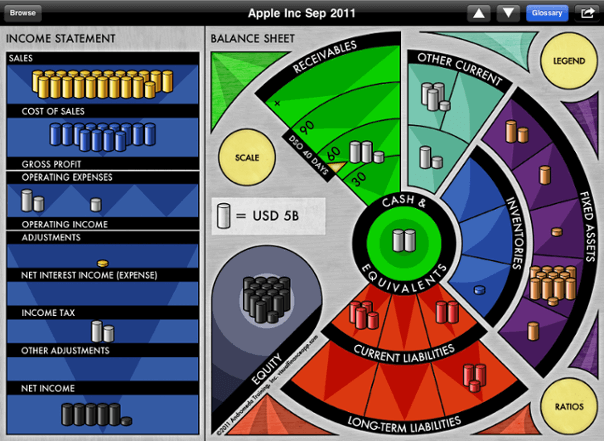 The received wisdom in the business community is that this should be used to grow the business and make more profits. Paying dividends is seen as denoting a lack of vision, and a sign that the company expects to coast instead of grow from now on.

In 2003 Robert Arnott and Clifford Asness published a study called “Surprise! Higher Dividends = Higher Earnings Growth” in the Financial Analysts Journal. Their findings about dividends include that “expected future earnings growth is fastest when current payout ratios are high and slowest when payout ratios are low”.

This meshes perfectly with Peter Lynch’s claim that many managers don’t want to lose control of cash. They would rather take the profits and cash flow from what they are good at, and buy some other business that they are really bad at, so that they throw cash into it and not have anything left over. His witty term for this, “diworsification”, has made it into business dictionaries such as Investopedia.

The further danger from this irresponsible empire-building is that the manager now controls more than he can handle, so he hires more managers beneath him, and inflates his own title and salary.

Paying dividends is therefore a sign of confidence that the company is so successful that they can meet all their needs from ongoing profits and cash flow, and can afford to turn the excess over to the shareholders.

As we say in Income/Outcome to teams with more cash than they need to operate: “First, make useful investments to achieve your strategy; next, pay down your debt; and then return the rest to the shareholders – it’s their money!”

Real eatate market also depends on hard cash, so if you are looking for a real estate lending, check more here.