One of this joke’s aspects is that it compliments as well as insults each nationality. What it really does is identify preferences. It says that the English prefer civility to creativity, the French prefer creativity to efficiency, and the Germans prefer efficiency to civility. None of these qualities is inherently bad, though an over-reliance on one at the expense of others can be a disaster. 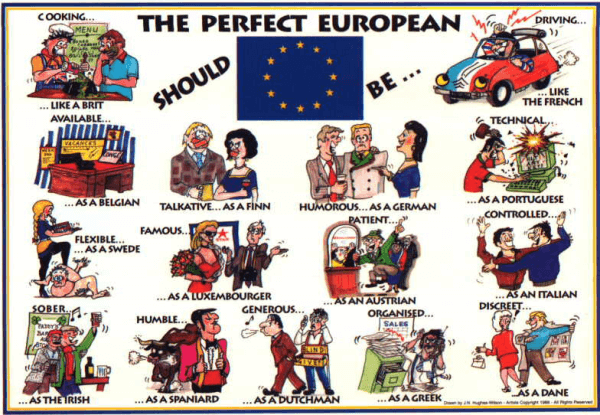 So here’s my teasing comments on diversity: imagine people from different departments as they would drive a car.

And nobody’s wrong! You need the map reader, and the focused driver, and the safety, and the improvements, if you want a successful business. The problem is that the different strengths are incompatible with each other, and aren’t all going to be found within a single person – including you!

That’s why we have teams. That’s the only way that you get the benefit of all the diverse skills – you get it from the diversity of the personalities. The trick then is to build a team that is strong enough to withstand the conflicts inherent in having people with very different outlooks working together. It’s an issue that has been with people since we lived in caves. You’d be surprised how many folk stories and fairytales from around the world tell of success only coming to the hero when the strengths of several strange individuals are built into a team.

When we run workshops, especially 2-day and 3-day ones, we’re confident in predicting winning teams and losing teams early on, not from the strategies they’re following or from their early results, but simply on how well they work together as a team. The best results come from teams that divide up tasks, share information, respect each other’s opinions, and make decisions after inclusive discussions. This mirrors the real world. It’s a key part of business acumen.

For the past year we have been working with the consulting group Transform People International, blending our financial acumen training with their DISC profile and team-building expertise to create a 5-day workshop – and we’ve had spectacular results. We have always had people modeled on our gameboard, along with the financial line items. But now we are increasingly blending the hard skills of finance with the soft skills of teams and diversity.

Because both are necessary for success.