HP, Bank of America and Alcoa dumped from the Dow!

As of September 20, Hewlett Packard, Alcoa and the Bank of America leave the Dow Jones Industrial Average to be replaced by Nike, Visa and Goldman Sachs. There is nothing particularly scientific about the Dow or its make up, but it is still interesting to look at its changes. Here is a logarithmic graph of its growth: 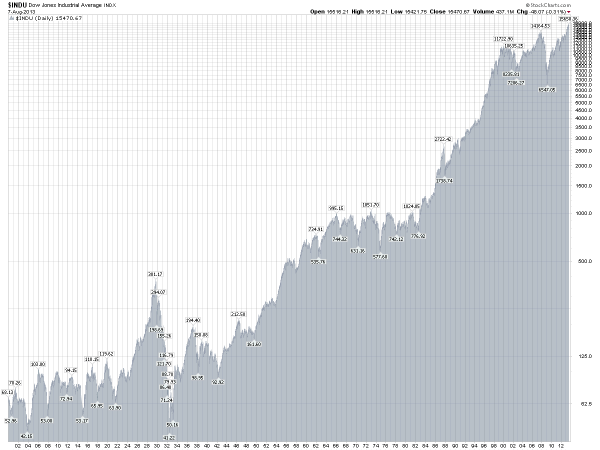 The 30 stocks are chosen as a simple way to represent the US economy in general. They aren’t all “industrial” any longer, but they are all large and publicly-traded. For some reason they don’t include transportation or utility companies, but anyone else is OK. The determination of admission is based on the seven esoteric calculations (or whims) of editors of the Wall Street Journal… owned by the Dow Jones Company.

Some say it is all just a public relations exercise, designed to show Wall Street in the best light. That’s as may be. It is still an interesting take on an (informally) representative bunch of powerful companies.

Now, about that change in membership: three old members that are somewhat struggling in various ways are replaced by three that are more vibrant.

That may seem like a harsh thing to say of HP, which lives in the fast-moving computer industry; but I am comparing it to a clothing company which is in the forefront of using clothing to monitor all aspects of health.

Bank of America may have much greater revenues than Visa, but it an old-school bank with 260,000 employees. Visa has only 8,500 employees, and is providing new-style banking services through mobile transactions.

With these changes to the Dow 30, the editors of the Wall Street Journal are endorsing the characteristics of business acumen, innovation, and speed of change.

And I support that, because those characteristics are what we teach in every workshop. Give us a call, and find out how we can help you too.