This week’s edition of The Economist has an interesting review of three books on infographics (“Winds of change”). Beginning with a mention of William Playfair, the Scottish engineer who created the bar chart, pie chart and line graph, the article highlights Google’s recent “Wind Map” as “a unique way to show near real-time data in a way that is both informative and elegant.”

That is a good way to describe the purpose in creating infographics. There is an educational aspect and an artistic aspect, and the finished product is a success to the extent it simultaneously delights the eye and the mind. The great classic is Minard’s 1869 flow-map of Napoleon’s disastrous Russian campaign:

Representing longitude and latitude and direction of travel, and key dates and the shrinking size of the French army and – in the return portion – the falling temperatures, it is an almost wordless story of an epic military disaster. It doesn’t replace the words of War and Peace, but it contextualizes the data of the campaign, and gives a sense of scale and relationship that is not possible with mere words for visual learners like the average human.

At Andromeda, we aspire to the same powerful combination of information and visual artistry when we represent corporate financial information on the Company Board and in the iPad app. Here is General Motors’ financial results for 2007, a year before declaring bankruptcy: 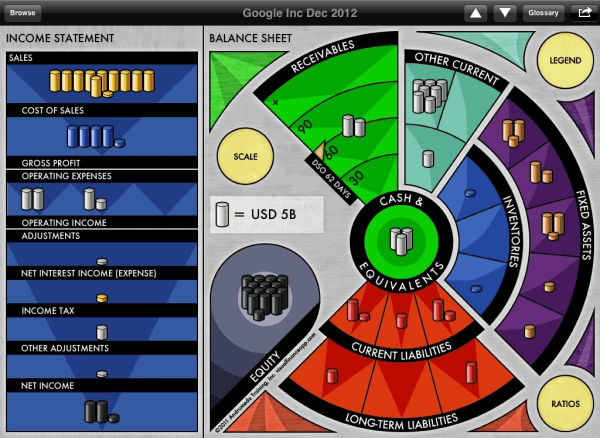 And even after the 2007 financial results were published, showing them losing a ton of money and being in massive negative equity, shares were still changing hands at, what, $37? If you’d had an infographic of their results, would you have bothered investing ANYTHING in this company?

This graphic is in the free download of the “Visual Finance” app for the iPad. Other platforms coming soon. Check it out!