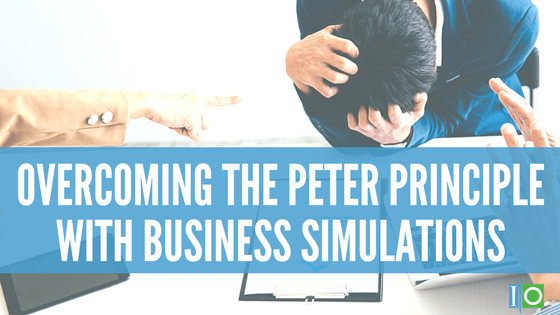 Written by Nikolai from Income|Outcome

Developing strong business acumen and financial literacy in leadership candidates can be a challenge for any business. Identifying when those candidates are ready to be promoted to the next level is even harder.  When talent development fails to adequately assess employees for the full set of skills necessary for future success, the promoted all-too-often find themselves failing- and trapped by the Peter Principle.

The Peter Principle, first described by Laurence J. Peter in 1969, describes how employees are continually promoted based on the KSA’s (Knowledge, Skills and Abilities) they display in their current role, instead of those needed for their future role. Thus, they are eventually promoted to a position beyond their abilities “to their level of incompetence.” This is the position in which they cannot succeed, and therefore from which cannot be advanced. In short, it’s a talent development nightmare.

A few years ago we ran the game of Income|Outcome® for a leadership group at an international energy company. One senior vice president in the company, a Type A personality, quickly began to dominate his team, loudly arguing for his vision. His team members deferred to him to set the strategy, to understand costs, pricing, and the impact of terms on cash flow.  After all, he was the senior leader at his table – and one of several responsible for setting the strategy within the company. So, he set the strategy. It went poorly. Though he attempted to make moves to course-correct, the course was not corrected.

He was lost – but the worst part was that he didn’t even realize it, nor was he interested in listening to his team or learning from the business simulation. He thought he already knew the answers. After all, he was the boss!  He drove his team into ruin, and the whole room (including the C-suite observing) saw him do it.

How did this happen, you wonder?

It’s actually simple to explain: This was the Peter Principle in action!

49 years later… the Peter Principle is alive and well. Why?

In the last half-century learning and development (L&D) departments have improved the ways in which they book, administer and track training-  but they have yet to solve the problem of how to screen out those who will manifest the Peter Principle. 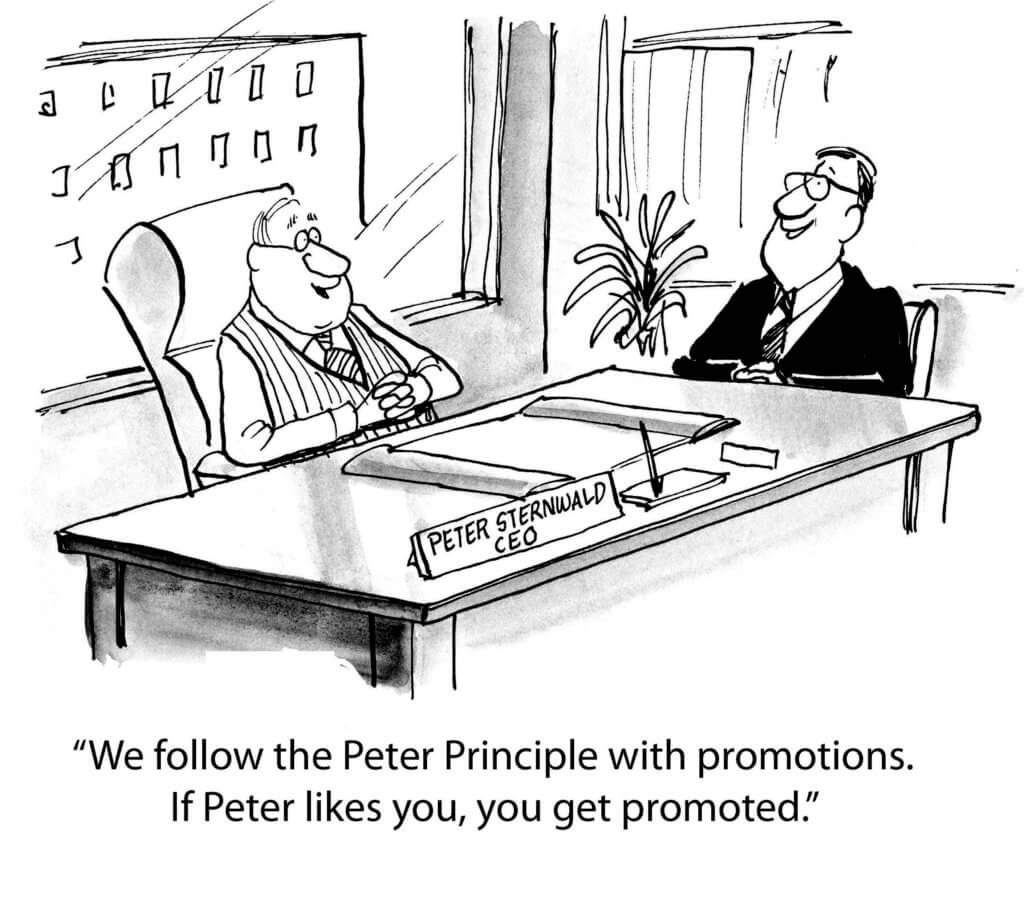 It turns out that incompetence is not limited to one functional area. Talent managers need to test a wide variety of skills to make sure the candidates they promote can succeed:

How can you test for these skills?

All too often, figuring out a comprehensive evaluation method is too tricky or time-consuming, and companies opt to “test the code in production.”

The Test the Code In Production Method*: Assign your high-potentials to projects and evaluate the results. Maybe even go a step further and perform 360° reviews for more insight into how your candidate works when you aren’t watching (because you can’t spend your whole day evaluating.) *Note: Don’t do this!

Best case: Your candidate is a key contributor, the project succeeds, and team morale is great. Your candidate’s promotion gets a green light, the Peter Principle is avoided, and you win!

Next best case: Your candidate’s faults are evident in the project (maybe even detonating it), the team morale is poor, and you’ve thus destroyed some value for your shareholders. The good news is, you’ve dodged a bullet and will avoid promoting that employee without further development. Yet again, the Peter Principle is avoided (however, it comes at a cost).

Worst case: The project is delivered, but the team covers for a fatal weakness in your candidate (as teams do) and you never notice. The candidate gets promoted and voila! The Peter Principle is alive and well!

How many ‘worst-cases’ is your business willing to tolerate?

We think this guy might be a pretty good pilot. Let’s have him do a few flights, see how it goes and then get a good 360° from the passengers.

Why are business simulations a better way to assess?

After investing 20 years contributing to talent development programs for hundreds of clients, I have become a firm believer that the best way to screen for the Peter Principle is with a good business simulation in the hands of an engaged talent manager.

Why? A simulation is an assessment without an exam.

You can’t build an exam for the myriad of categories where future failures may lie. Your candidates don’t all test in the same way, some characteristics do not lend themselves to testing, and you may bump up against ethical issues in test-based promotion. However, if you can assess instead, you may see where difficulties lie. This allows you to remediate weaknesses with additional development or delay moving a candidate up into a position where they may fail with their existing skill set.

The most effective way to assess potential is to watch participants behave in a compressed yet realistic environment. If airlines and the military use flight simulators, then why shouldn’t businesses use business simulations?

Fun fact: The Federal Aviation Administration (FAA) certifies those flight simulators and uses Andromeda’s federal simulations for their internal training. They get it!

A good simulation is:

If you balance teams properly and circulate to observe them during the programs, you will get your assessment: a good look at your candidate’s KSAs and key insights into their future performance. Smart organizations use business simulations in this way to streamline the talent development process,  empowering their workforce with the foundation necessary for the future and promoting them into success.

In our business simulation, the game of Income|Outcome®, high scores are NOT what you’re looking for (though they can be meaningful). Instead, you’ll be evaluating the behaviors that you need to assess as indicators of future success (or incompetence).

It’s not about winning or losing, it’s how you play the game (literally, in this case). I’d bet a stack of chips that this was first said by a learning and development (L&D) director at a company that has integrated a top-tier business simulation.

Want to get in the game?

Income|Outcome® business simulations run from four hours to three days, and there’s a business acumen workshop for everyone in the company. Contact us today to learn more about how Income|Outcome® can empower your team to drive better business results.