What is Return on Sales?

The reason we put these three together is because they relate; the first two multiplied together give you the third. These three ratios hang together as a triangle, but each must be understood individually in order to make sense of the whole equation.

To begin, we can arrive at the following definition of Return on Sales:

Your bottom line profit (or return) as a percentage of your top line (sales). Out of the sales that you’ve made, it is the percentage that is your eventual profit after you’ve taken out all the costs and expenses of the business. In other words, profit as a percentage of sales.

“Return on Sales” refers to the profitability in a business, but “profit” can be deceiving.

People may talk about whether a sale is profitable or not, but they may be defining “profit” differently. A salesperson may say that his sales are profitable so long as he sells his stuff for more than it costs to make it. But in this case he’s not taking all the other costs of the company into account.

When you use a precise term like “return on sales” you’re making sure that people are going down the income statement to the very bottom line and seeing how much profit is left after all expenses are paid.

So a formal term like “return on sales” demands a more accurate picture from the speaker, it defines profit as ‘what is left on the very bottom line.’ The term is used mostly by finance departments, but as you can see, its usefulness extends beyond that corner of the company. 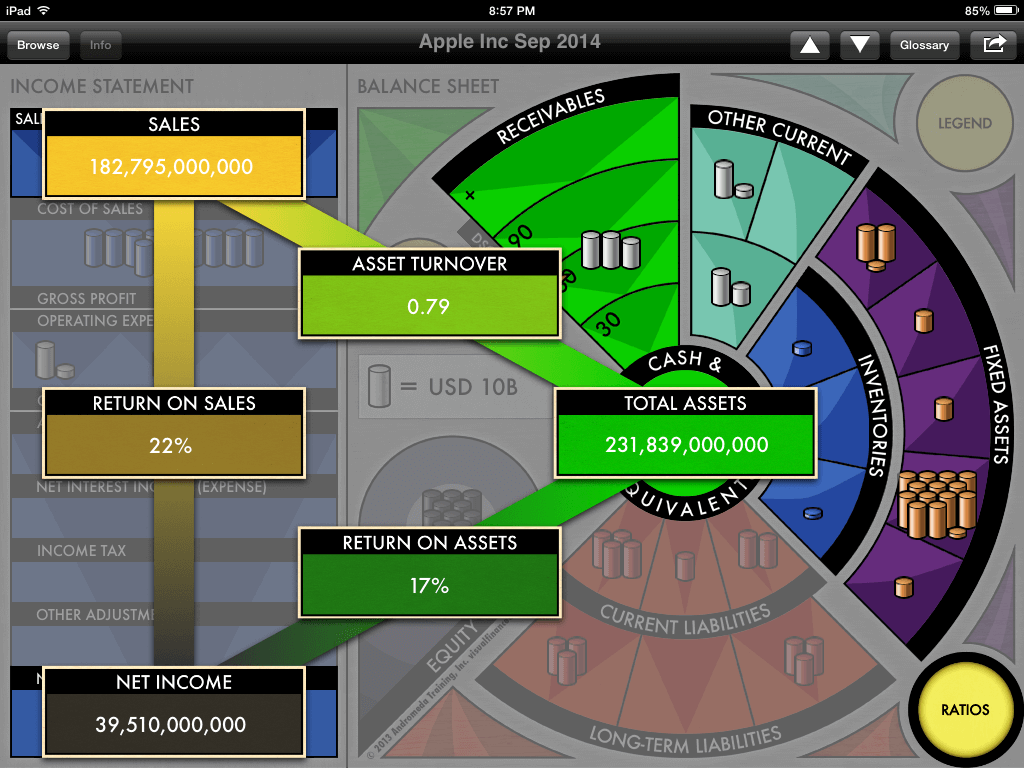 In this visual ratio analysis of Apple in September 2014, you can see that Apple had a return on sales of about 22%. That means for every dollar Apple took in in sales revenue, they kept $0.22 as profit.

Twenty-two percent, by the way, is a remarkably high number. Most companies are happy to get a 5-10% return on sales.

Obviously, if you’re unprofitable and losing money, your bottom line is going to be a negative number. So your return on sales will also be a negative number—but if your gross margin is positive, then increasing sales will help the situation. In general, you should manage your accounts to have a clear picture your turnover and profit.