I’m just back from 10 days in Singapore, where I ran a two-day Finance & Strategy workshop for Micron Technology. That’s a version of Income/Outcome with a disruptive technology factor, a very appropriate dynamic for the ever-innovative Singapore, as well as for Micron’s semiconductor industry. This was followed by a two-day Train-the-Trainer process for five of their personnel, followed by a three-day conference for our own regional Distributors at our annual Income/Outcome University.

Singapore is my favourite city anywhere for business. Some people say it feels a little limiting after four months or so, and Indonesian forest fires can be a major irritant when the wind blows from the southwest. But children and teens seem to love it, as do expats who prefer year-round warm weather. The forecast offers a normal range from “32 and sunny” to “32 and rain”, although there is an occasional cold snap that slashes the day’s high to 31, or an occasional heat wave that hits 33. That’s my kind of perfect. (32’C = 90’F for the less international).

There is one disadvantage, from my point of view: Singapore is the opposite side of the world from our North Carolina head office. Forty hours it took to get home, door to door. But again, that just reminds me that I am living on a planet (not a flat earth), and living on an actual planet is very cool. Which has its own complications, such as trying to figure out when to try and reach people on the other side of the world. Here is the best link yet: http://xkcd.com/now 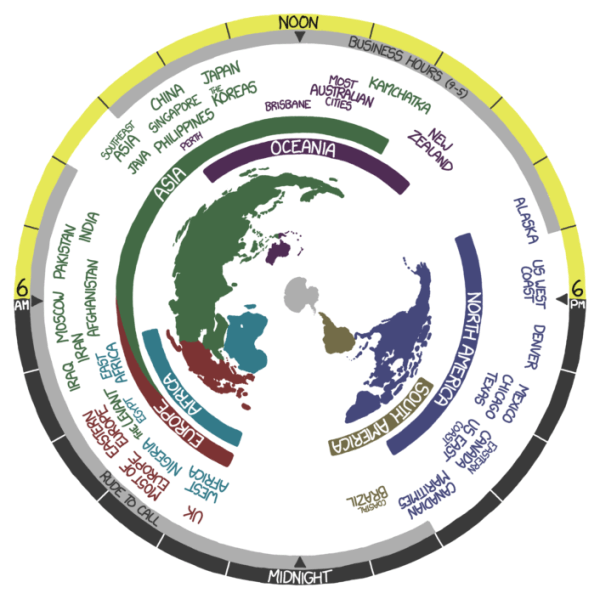 The link gives you a clock that clicks on every few minutes, showing the world rolling always up towards midday and down into the night. It’s a planet. I tell my kids not to worry overly about things like career risks – don’t worry, because you’re just going round the sun on a planet, and you can’t fall off.

When we brought our Distributors together from Singapore, Thailand, China, New Zealand, Australia, Kenya (and even a very brief appearance from the reticent Japanese), I had another global epiphany. I’ve grown up staring at maps and always thinking of Australia and Nw Zealand as being tucked away in the bottom right, far from everything else.

But now I realise that they are the English-language centre of business training for the whole Asia-Pacific region. Facilitators fly from Australia to China to teach, HR managers fly from Australia to Japan to monitor a workshop. But Australia and New Zealand are also very closely tied to both the UK and the US. In effect, given that English, per Schumpeter in the Economist, is the primary lingua franca of global firms (well, after the language of finance, of course), that makes ANZ+S the best business node on the planet.

It feels like the business world isn’t just moving east from the US towards China, but also in some ways moving south. Singapore, Australia, New Zealand – developing as a (the?) centre of global business.