In preliterate, prenumerate societies – according to dubious sources – people only count “One, two, many”. It seems a little strange, given how much people everywhere use their fingers for keeping track of larger numbers and that most people have more than two fingers. 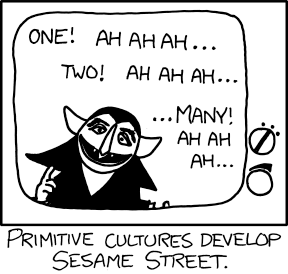 Once again, xkcd illustrates the thought.

The basis of the idea could possibly be in the grammatical structure of some languages. Where we have two numbers for nouns (singular and plural), some “primitive” people have three: singular, dual and plural.

But for the sake of this discussion, let’s consider a tribe that has no numbers beyond “one, two, many”. What then does “many” mean? It’s not an absolute, it’s contextual. If you see five or ten lions, that could well be many. But five or ten ants? That would be “not many”. Without the ability to count, let alone to record the count, estimates and plans are necessarily vague. “We should go beyond the mountains. It will take us many days and we should take food.” How much food? That’s hard to say.

If one person learns to count, they can develop plans because they can conceptualize the number of people, the number of days, the amount of food, and determine if they have sufficient resources or how many additional resources are needed. But they don’t get help in this, they may not get support, and they have to rely on their own observations for data.

If a team learns to count, they can discuss the data and the resources and the plans, share ideas, build a consensus and commitment, and monitor more details than a single person can.  But they are still limited to discussions within their own group.

If the entire tribe, scattered in clans and villages, learns to count and record numbers, data can flow throughout the tribe, distant information can be added in, larger operations can be planned, longer range projects can be created, the culture as a whole develops its resources more efficiently, and – if it is competing with other tribes for resources – it will have a competitive advantage which should see it expand at the expense of its neighbors.

All of this holds true in the corporate world for workshops that teach business literacy. Finance is the language of business, and all business plans need to be expressed in numbers in order for their costs and benefits to be assessed, and compared with alternate plans.

When one person becomes financially literate, they can do better analysis and make better plans. But they will be working on their own, and may not have support for their conclusions.

When a team improves their financial literacy, they can share and critique ideas, compare plans, build a consensus, monitor more items than one person can alone.

And when an entire company develops everyone’s understanding of financial concepts and numbers, information flows rapidly and accurately throughout the company, planners have access to the widest and freshest data, managers have the tools to track and discuss their operations, everyone buys into the importance of key metrics and knows how to improve them – and the company has a competitive advantage over its rivals in the industry.

So, although we are always happy to run a business acumen workshop for a company, we are even happier when we are part of a company-wide initiative. Because then we don’t just develop the individual’s understanding and skills – we are simultaneously developing a common language, improved teamwork, better information flows and a culture of decision-making and responsibility.

The more people within a company we train, the more benefit each individual receives, and the more value the company gets for its money.