What is Working Capital?

At its bare bones, “capital” is wealth. But as the definition is fleshed out, it becomes clear that not all kinds of capital are alike.

Working capital (also known as net working capital) is the amount of funds needed to run a business day to day. This includes cash needed to maintain inventories and pay expenses.

The main difference between working capital and other types of capital is that working capital, by definition, circulates through the business, unavailable for other uses. It’s not machinery, land, and buildings, which are fixed assets. Rather, it’s the rhythmic needs of the business: inventory building up then being sold, waiting on money to come back in from sales, paying bills, renewing inventories, and starting all over again.

Finding, and Being Informed by, Working Capital

Working capital can be found by adding together cash, accounts receivable, and inventory then subtracting the accounts payable (unpaid bills) and other short-term financing obtained in relation to the business’s current assets. 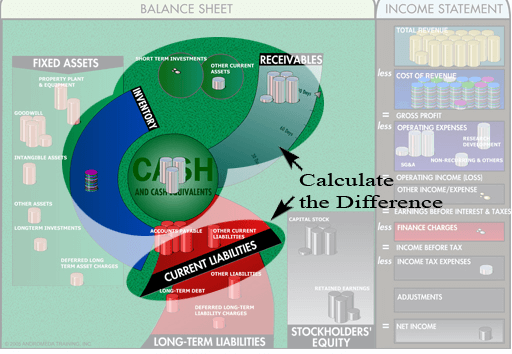 Working capital is an immediate concern for the operational level of the company. It’s also very much related to cash flow, which we have previously explored. For example, when salespeople make really good sale but won’t be paid for two months, the company’s working capital needs increase dramatically. A lot of money will sit in receivables months without coming into usable cash.

Suppose a company runs four power plants, and each plant has to have an inventory of wiring and other tools and equipment, to be used if anything goes wrong. The company doesn’t want to cut back on those necessary items, but it could keep those parts and tools in a central location available to each plant. This would require less working capital, since the smaller inventory frees up cash that may be used for other things.

That is the simple truth: companies want their working capital to be as lean as possible. They want customers to pay faster, reducing “days sales outstanding.” In addition, they want to work with lower levels of inventories and wait longer to pay their bills, if possible.

The CFO of one of our clients is aiming to free up non-cash working capital, because he wants more money to invest and leverage for other projects. He’s driving that thinking down to everyone in the company so they can “up their game,” as it were.

He’s getting everyone in the company to look at a balance sheet to understand where money is tied up. He knows that they all want to expand capacity, hire more people, and make more sales. Using the balance sheet, he can make the point that every $1,000 his departments have tied up is $1,000 he doesn’t have to expand.

This CFO is highlighting why working capital is so important. People like to stockpile inventory “just in case” and give customers as long as they need to pay because it makes a good relationship with the customer. They don’t always realize the big-picture problems that result.

Another example of managing working capital is found in supermarkets. Supermarket customers pay cash immediately, but the market isn’t paying suppliers for 30-60 days.

The founders of Pick n Pay in South Africa were privy to this dynamic. They were successful because they offered low prices, yet they had the money come in before having to pay their bills.

They knew that they would have money sitting in their hands for a full month at a time. They took that one month of money and put it into the Foreign Exchange Market buying and selling currencies. They made money that way—not by making a profit in the supermarket—and grew it to be the second largest supermarket chain in South Africa.

Working capital is a bit of a tough figure to track. Fixed assets such as machinery are easy to price out, but working capital involves a revolving process made up of many moving parts.

Yet, it is an essential calculation for businesses to understand.

Too much working capital stands in the way of expansion and other investments that drive growth.

Low working capital, on the other hand, opens the door for a business to exert maximum effort towards its own success.

One thought on “What is Working Capital?”