Americans and Canadians think they have problems with bureaucracy.

I agree that bureaucracy can be an evil that prevents business development and stifles entrepreneurial initiative and limits an entire country to being an economic backwater. I’m not talking about an Environmental Protection Agency preventing a business from dumping toxic waste into a creek – genuine economic development requires an effective EPA. That is bureaucracy functioning as it should, despite what people say about America’s Democrats and Canada’s NDP. 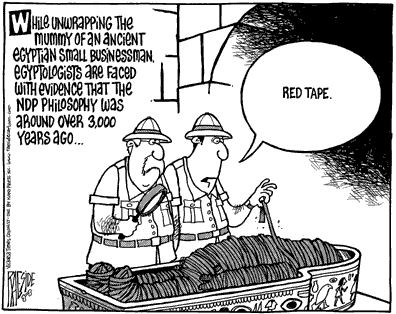 But red tape can kill businesses.

We recently wanted to transfer responsibility for a contract from one business entity to another under different ownership (although the actual work would still be performed by the same people). From Andromeda Training to a foreign company, for work to be done in that country. You would think that would please the foreign country, that the profits would be made and would stay in the country and would be furthering the development of the local economy.

The foreign client wanted a document authorizing the transfer. In the US we would normally just put it in writing, sign it, maybe have the signature witnessed.

But the client, being state-controlled, required:

This was then couriered and presented to the client.

Their first comment was that the Embassy stamp was in the wrong place. We told them that they were free to tell their Embassy in the US that they had done it wrong, but as far as we were concerned their Embassy knew what it was doing.

Their second comment was that this document was fine, but it still needed to be

So we got that done too.

Their third comment was now that we had the authorization to transfer the contract, we needed to rewrite the entire contract to remove the US company name and replace it with the local company name, and then have it signed by the client’s CEO. That signature would likely take a month to obtain, because he is very busy.

So here we are in October, still unable to even submit an invoice for work done in June, because the paperwork is not complete.

When the new Agreement is fully signed and in place, will that be the end of the matter? Probably not. I expect we will have to get all the June paperwork redone – signatures authorizing the work, and confirming authorization of the work, and our accepting the request for work, and their acknowledging the completion of the work – all that will need redoing…

This amount of bureaucracy is unnecessary. It is the result of a culture lacking in business literacy, business acumen, and entrepreneurship. A manager who doesn’t know what his overall purpose is, and who doesn’t understand business finance, avoids decisions by requiring someone else to say things are OK before he is prepared to put his signature to anything. So we get a chain of signatures that fail to add any security or other value to the system. All it does is slow the process down, delay the implementation of improvements, and discourage investment in the economy by either inhabitants or outsiders.

In a situation like this, if the economy is to become globally competitive, the culture has to change.

The good news is that the foreign client understands this, and this is part of what our contract with them is about. All the bureaucratic excesses need to be overcome – that is an inherent lesson inIncome/Outcome workshops. Success comes from speed and accuracy of information flow, and a culture that supports decision-making.

So I’m not angry at the frustrations of implementation. It is only the Universe laughing.