The Economist had a recent leader (editorial) headed Visas for entrepreneurs: Let the job-creators in. This in turn was triggered by an article in the same issue, looking at the initiatives of Chile and other countries to attract entrepreneurial immigrants (Visas for entrepreneurs: Where creators are welcome). In contrast to countries that have no policy regarding business investors or start-up entrepreneurs or that – like the US – have a million-dollar investment barrier, Chile has no investment minimum for entrepreneurial immigration applicants. Chile not only gives a one year visa, but actually pays the immigrant up to $40,000 without taking an equity stake in the business. 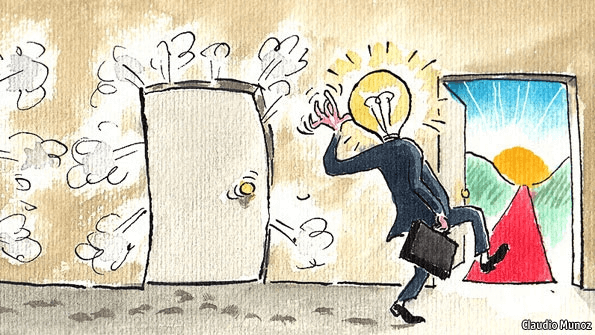 Who wouldn’t welcome entrepreneurial immigrants? They create jobs. But the problem is, they don’t just bring fresh ideas to the creation of products and services, they bring it to your whole culture.

Look at the Middle East: which country is the most entrepreneurial? Israel which – for good and bad – has been in a state of massive immigration and massive social disruption (to put it mildly, from the Palestinian viewpoint) for the past century. Meanwhile, the least entrepreneurial countries are those that most strongly resist immigration because they resist cultural change.

This is the essential dilemma: maintain the comfort of familiar ways, and stagnate? Or accept unpredictable innovations and improvements, at the cost of your traditions and cultural norms? And note: everything in this post applies to companies and their cultures, as well as to nations!

Some countries have come to a balance, in which the freedom to create cultural change is part of the cultural norm. The US has been spectacularly good at this, and generates far more than its share of bizarre ideas, some appalling, some brilliant. And cultural change is increasingly accepted as normal around the world.

Not that everyone accepts this. The entrepreneurial immigrant, identifiably different through language, race or clothing, will inevitably draw a confused mixture of resentment and admiration, expressed as mockery:

Q: Why don’t East Indians ever make it to the World Cup?

A: Because every time they get a corner, they put a store on it.

Hold on to the compliment hidden in the joke, immigrants, innovators and entrepreneurs! Keep smiling, because eventually they’ll value you for improving their lives as well as your own.