Eagle’s Flight Team Building France takes its name from one of its simulation suppliers, the Canadian company whose best-known product is probably “Gold of the Desert Kings”.

As Eagle’s Flight focuses on soft skills like Team-Building, Andromeda’s simulations are a natural choice when an Eagle’s Flight client or distributor is looking for hard skills like Financial Acumen. A healthy company needs both types of skill of course. 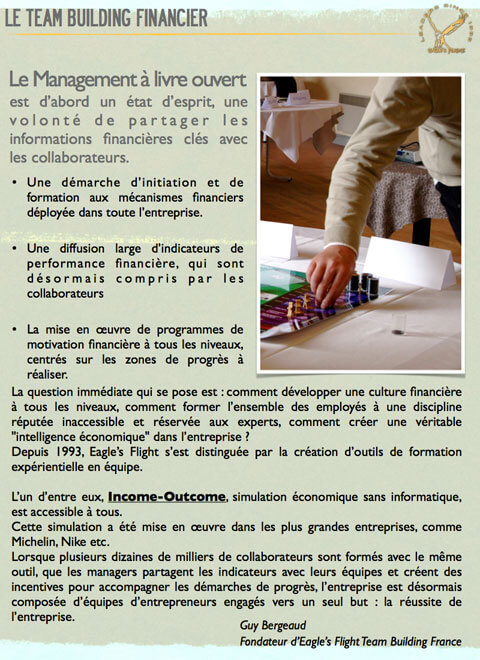 Eagle’s Flight Team Building France has run our Income/Outcome workshops for 15 years, and has been the preferred Distributor to our clients in France including Michelin and BIC. In keeping with their general marketing direction, they find that Financial Acumen is best taught through the process of increasing the general skills of the team, as in this document.

This raises the interesting issue of whether there may be an underlying cultural difference, that the French (“Liberté, égalité, fraternité“) prefer to think that their priorities are social, while Americans (“Life, liberty and the pursuit of happiness“) prefer to think that their priorities are individual. In reality we all have both social and individual needs, and there is an overlap in the French and American slogans.

But as humans, even when our group thinks the same way as another group, we usually prefer to think that we are different from everybody else.

And not just different, of course. Better. We humans all think our own group is better than the others. It’s one of our strongest human commonalities…