The Business Acumen of the Long View

Nicaragua (that name isn’t usually thought of as a lead-in word for a post on business acumen) is quietly in the news at the moment, as a partner in a Chinese development plan. A new canal through Central America – with supporting infrastructure of rail lines, international airport, etc. 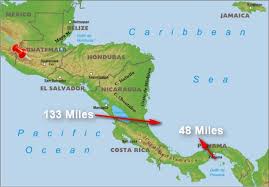 It’s a $40 billion investment proposal, with a 50-year concession granted by the Ortega government to 41-year-old businessman Wang Jing – through the Cayman Islands-registered unit of the Hong Kong-registered HK Nicaragua Canal Development Investment Company that is 100% owned by him. He says he’s just an ordinary guy. No special connections to the Chinese government, or anything.

Nice handshake. Looks like Wang has a good grasp of Ortega.

But why do it, when there’s already a canal there? And TransPacific traffic is (perhaps) going to become less important? And new sea routes are opening up through an ice-free Arctic? Is there something sinister happening?

That’s like saying, why build a new highway next to an old road? Why build a second or third airport for a city? Even if it’s backed by the Chinese government, its major impact is to give the Chinese more flexibility and more security of access to the east coast of the Americas from Argentina to Quebec. It’s about resources, and trade, and self-funding through making money off the traffic.

Back in the early 1970s when the whole of southern Africa was in the grip of white minorities – South African apartheid, Rhodesia, Portuguese colonies – the Chinese financed and built a railway from the Tanzanian port of Dar es Salaam into the center of landlocked Zambia, providing an alternative export route for Zambia, freeing it from white control of its exports.

Officially called TAZARA, the railway is also known as the Tanzam Railway and, because of its strategic importance for newly-decolonized Africa, the Great Uhuru Railway, Uhuru being the Swahili word for Freedom.

Forty years later, much of Zambia’s Copper Belt (rich in many ores, including cobalt) is owned by the Chinese instead of Europeans – including Chambishi where Eliza and I had taught in 2002.