Travel and trade (including the trade in ideas) go together naturally, and therefore so does innovation. You should expect that the crossroads of travel and trade will have not just the biggest mix of peoples, but also the most entrepreneurship and business acumen. If you want to develop an entrepreneurial spirit, therefore, you should look for the greatest crossroads. 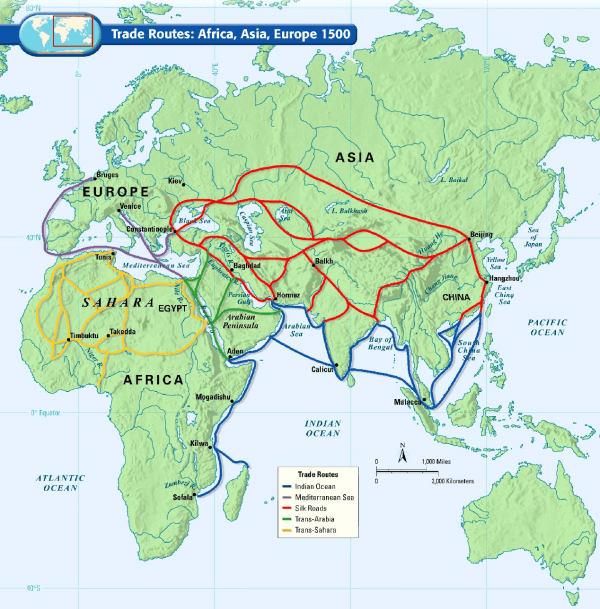 When most trade was by land, the Middle East was the center of the Old World and the place where the greatest trading and innovation took place. When serious ocean travel developed after 1500, factors other than geographic centrality became important – technological competition became the driver of change. This favored a fragmented area like Europe, rather than the empires of China, India and the Arab world. Empires like stability and bureaucracy, whereas an Empire-sized collection of smaller states is more likely to produce a couple of aggressive innovators. The Spanish, Portuguese, French, British and Dutch started trading around the world by sea, and trading posts led to colonies and empires.

With the development of air travel and telecommunication, the patterns have shifted again as all the world starts to be a single market. A diverse market will tend to develop a lingua franca; the early dominance of first Spanish and then French has given way to English, thanks not just to the use of English around the British Commonwealth, but to Hollywood and pop music.

The centers of business acumen tend to be those places with a lot of travel, a big mix of immigration in past couple of generations, and an easy acceptance of English as the first or second language. London, New York and California are obvious examples.

Governments put themselves at a competitive disadvantage if they resist any of these. India and many Arab countries are comfortable with English, but create barriers against immigration because of fear of “losing their culture”. They don’t want to be “Americanized”, without appreciating that “Americanization” is not so much a national phenomenon as a global assimilation. You only have to consider American fast food chains: hamburgers, hot dogs, fries, tacos, pizza, Chinese, ice cream, coffee… none of it originated in the United States, but all of it was modified and the innovations were then mass produced and exported back around the world.

Maintaining your culture is valid to the extent that children benefit by growing up with a sense of living in an orderly and safe society. But they also benefit by having a sense that they are free to experiment, to choose what they want to do in life and who they want to be. The healthiest societies, both economically and socially, are those that respect the diverse origins of the various threads of the social fabric, while expecting that new and unpredictable patterns will constantly be created.

Look to the places who strive to be at the crossroads of global travel and trade, and who are prepared to push government policies to make it happen, and where English is commonly used in the street – whether or not it’s the first language of the people. Singapore and Dubai stand out in those ways.

However, there is still a major difference between them: Singapore has a culture of pride in working hard and achieving good results. Too much of Dubai and the whole Arabian peninsula has a culture of male pride in not doing any meaningful work; though the governments are doing their best to change this.

The successful governments will be those who open their doors to travel, trade, innovation… and global culture.

By the way,  if you want to learn to trade in south Africa, at Andromeda we don’t teach English. For us, the language of business is Finance, and we teach that with the game of Income/Outcome – in 15 languages.