Why I adore Singapore: efficiency, beauty and business acumen

WARNING: this post is biased! I’ve only been to Singapore twice, and I only know it as a business visitor, not a resident or other insider. But when clearing Immigration control a) had no lineup although I was coming off a jumbo jet, and b) took 30 seconds… then it was love at first sight.

Here is one of the shopping areas in Singapore’s Changi International Airport: 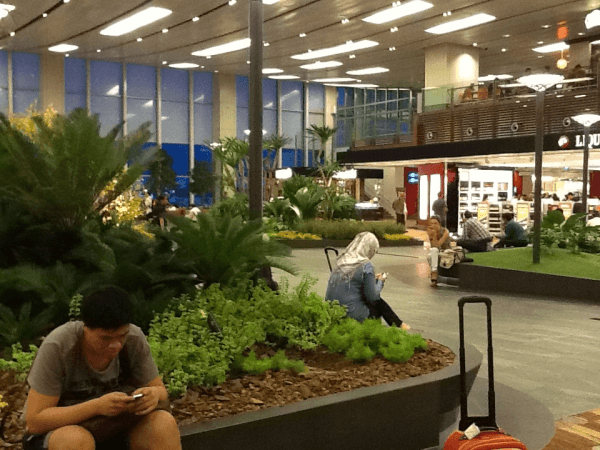 Compare this to the place I was coming from, Saudi Arabia. To get into Saudi Arabia I had to have a letter from the Saudi Foreign Ministry, in response to a request from my sponsor, authorizing the Saudi Embassy to grant me a visa. I tried to get my visa in the US where I live, but the Foreign Ministry letter (in Arabic) was apparently addressed to the Embassy in Bahrain, so my application was denied and I had to fly to Bahrain to apply. However I am not resident in Bahrain, so initially I was told my paperwork was wrong. After various phone calls and negotiations I was told to get a letter from my sponsor, on letterhead and with an official stamp, stating that my sponsor (partly government-owned) urgently requested my presence in the country. This was faxed to the visa processing office that was acting as go-between. This part of the process took three days. Not including the initial application for the letter, or the time and money wasted on applying to the Embassy in the US, or the actual entry which took another hour of standing in line (and fingerprinting, and waiting for the computer system to come back online) at the border crossing on the Causeway from Bahrain.

I may need to get visas for several countries in a year. Some, like Saudi Arabia and the US (where I have been living for 20 years as a Canadian, and still need a visa) take several days. The US visa is good for 5 years, but the Saudi one is issued for sometimes six months, sometimes only one month, depending on the whims of the processing official. So let’s say that two work-weeks a year are spent on the visa process while staying in hotels – in Toronto for the US, in Bahrain for Saudi, etc. Unnecessary cost, and a drain on productivity, and repeated again and again.

Modern technology can avoid this: simply allow people in, and monitor them and deport them if there is a problem. This raises privacy issues which I don’t care about, because I don’t have anything to hide.

What else do I love about Singapore? People there both want to work and are required to work. There is a 2% unemployment rate. The government employs a lot of people in maintenance capacities: the highways are not just perfectly surfaced, they are all lined with flowering bushes and trees. And the bushes are trimmed. And the overpasses and bridges are lined on the outside with bougainvillea and other flowers.

Thw whole place is green. The city has little parks scattered through it, all well maintained. And litter-free. I once saw a couple of pieces of litter on a grassed median, but my taxi passed it before I could get a picture… I never got a second chance. The government is committed to showing the world that a country can be beautiful and efficient, economically powerful and environmentally responsible.

Singapore was ranked No. 1 worldwide for the ease of doing business by the World Bank in 2012… for the 7th consecutive year.

Now, where in Asia would be the right place to put a new Income/Outcome office for Andromeda Training? Saudi Arabia, where I need to spend one week per year and $1,000 on constantly renewing my visa? Or Singapore, where it’s 30 seconds, and free?

One thought on “Why I adore Singapore: efficiency, beauty and business acumen”